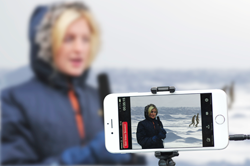 Making its debut on the Livewire stand is the ‘commercial release’ of NetCaster®, the mobile newsgathering solution, designed to allow groups of untrained personnel to contribute to broadcast or streamed shows from an iPhone or iPad. Available free from the  App Store®, NetCaster now incorporates event management and the integration of RazorLink™ technology for the delivery of file based media (HD video files, audio files, photographs) and live video. RazorLink™ network acceleration technology ensures highest quality live video and super fast, extremely reliable file transfer over any Internet connection, whether it is 4G, 3G, Wi-Fi, or satellite.

The new RazorLink™ technology ensures that picture quality is optimised for the link conditions, no matter what the available bandwidth. Where there is insufficient bandwidth for motion video, NetCaster® can drop back to “sequence of stills’ mode meaning that viewers always see live pictures rather than no image at all.

New videos, photos and audio recordings can be captured in the app with simple capture tools, or existing photos and videos can be retrieved from the Camera Roll and delivered using NetCaster® Encode and Transfer tools.

NetCaster® incorporates Livewire’s renowned BGAN Control tool, designed to simplify the  use of a satellite terminal and the simple accounting tool keeps track of all NetCaster®  phone and data usage, warning users when a pre-set threshold is reached.

The OSX application, NetCaster® Producer located at the receive site, receives all media and live feeds from the NetCaster® Contributors deployed in the field. Easy-to-use production facilities offer split screen functionality, enabling the production team to view media from up to six contributors at any one time and to manage their video and audio feeds. NetCaster® Producer enables the operator to incorporate received media and live feeds into an HD production, which can be delivered to a broadcast environment, streamed on the web or recorded for later use.

For broadcasters, NetCaster® Producer can also be run in unattended “headless” mode so that as soon as a remote contributor connects live, their 1080 HD video feed is automatically output to downstream systems.

The use of NetCaster® Contributors

The use of NetCaster® Contributors is managed using NetCaster® Events, giving control to producers and event organisers. NetCaster Events define the number of remote users and the duration, both of which can be effectively unlimited if required. Once the user enters the code for the event, the app is automatically configured to deliver to the NetCaster Producer of your choice.

A Realtime Chat tool is included in the NetCaster® app and Producer application, allowing for co-ordination of productions offline.

During testing NetCaster® was deployed to selected sailing crews competing in the Rolex Fastnet Race, the largest offshore yacht race in the world. Commenting on the product, one crew member said, “NetCaster® worked perfectly. I was transmitting imagery of the action whilst talking on the iPhone – it could not have been better. Being able to have that kind of communication over satellite was really, really, impressive.” Eddie Warden-Owen, Chief Executive of the Royal Ocean Racing Club, organisers of the Rolex Fastnet Race, praised NetCaster® saying: Livewire’s ‘box of tricks’ has given us the ability to share insights into life onboard during this challenging race, as well as the varying emotions of the crews as they pass milestones such as the iconic Fastnet Rock off the southern tip of Ireland. It is an important tool which allows us to enhance the way we communicate the story of the race, minute-by-minute, as it unfolds.”