Sunday 22nd October saw an exciting start to the 2017-2018 Volvo Ocean Race in Alicante as 7 teams set off to cover 45,000nm, the longest course in the history of the race, over a period of 8 months.
Livewire Digital has designed the media and communications to the “Formula One” of ocean racing since 1997. During the past 20 years, the systems have undergone several innovation design phases and the 2017-18 race is no exception. Each yacht has RazorLink Smart Networking on-board to integrate the three Inmarsat Fleet broadband terminals, four 4G modems and in-port Wi-Fi to provide seamless connectivity with Race Office. 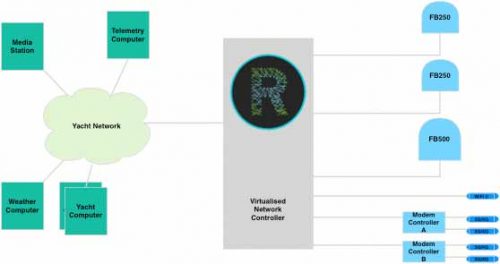 On board reporters (OBR’s) are embedded in the racing teams, their job is to bring the story of the race to the millions of fans who are following the action on digital media and TV.
The complexity of media acquisition and managing the sophisticated communications are presented to the OBR as a series of intuitive workflows, allowing them to focus on capturing the drama of the race and delivering content to the public.
One example of this is the delay line, which ensures that no event is missed. The stern camera is continuously recording and when a set of telemetry criteria are met, or the crash button is pushed the material is saved.

Sun Hung Kai/Scallywag lost a headsail overboard, after a pin holding the sail popped out – captured on the delay line from the stern camera.

The games have begun; we look forward to the unfolding story, which will be told over the coming months…